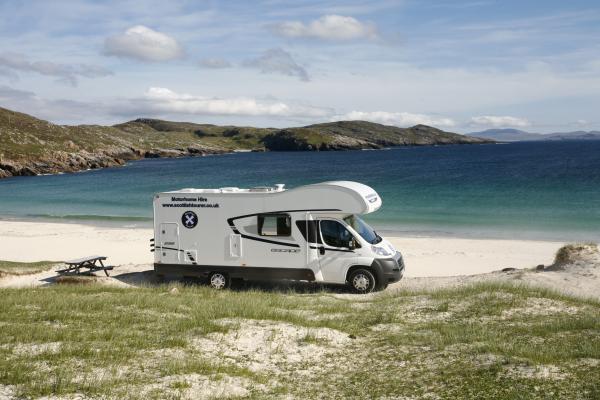 Tour Scotlands Islands by motorhome is becoming a popular choice for people within and for those who travel to the UK. The reasons are many and varied, however they will almost certainly include the rugged coastline, wild and open wilderness, high mountains and stunning secluded lochs. Here are some routes that take you to the Hebridean islands.

Easy access to the Hebridean Islands is one reason why many people choose to tour Scotlands islands by motorhome . Perth to Ullapool and then on to the Ferry to Stornaway in Lewis is one of the main Hebridean islands . Perth to Ullapool  only takes around 3 .5 hours.
Travel through Lewis then to Harris then catch the Ferry across to North Uist travel down to Barra through South Uist the the Ferry to Isle Of Skye the from Helmsdale get the Ferry to Malaig on the Mainland. 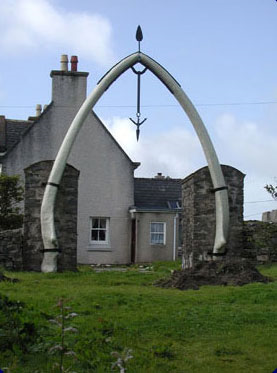 The magnificent Whalebone Arch now stands as a gateway in the garden of the two houses.

This is situated beside two houses on the A857. If you are coming from the North then it is on the right hand side. If from the south, then obviously on the left.

The two bones that comprise the arch are the lower jaw bones of a Blue Whale and were removed from a beached Whale that came ashore in 1920. The harpoon that is shown in the picture was still in the Whale, however the explosive charge in the Harpoon’s head had failed to explode. Therefore, both Whale and Harpoon were intact. The Crofter that dealt with both Harpoon and Whale was lucky not have been injured when the Harpoon’s head finally exploded in his shed. Luckily he was not in the shed at the time.

The magnificent Whalebone Arch now stands as a gateway in the garden of the two houses.

If you do intend to tour Scotlands Islands by motorhomes then don’t miss the blackhouses in Lewis.
Blackhouses were so named not because of the fact that they were in the early days smoke filled and had small windows, but because they were compared to new houses being built in the late 1800′s which were called ‘white houses’. The new ‘white houses’ were designed to separate humans from their livestock and animals.

The design of a blackhouse originates back several thousand years, as does the constructional method. The building consists of two concentric dry stone walls with a gap between them filled with earth or peat. The roof was either thatched or made up of turfs and constructed upon a wooden frame. The frame was supported by the inner wall, which gave the characteristic look of a shelf around the outside of the building. As the roofing material had to withstand quite extreme weather conditions at times, the roofing material was often secured down by using netting with large stones tied at the ends.
Unbelievably, some of the blackhouses were still inhabited until the middle 1970′s, although it has to be said some blackhouses had fireplaces and chimneys, instead of the chimney free traditional construction. 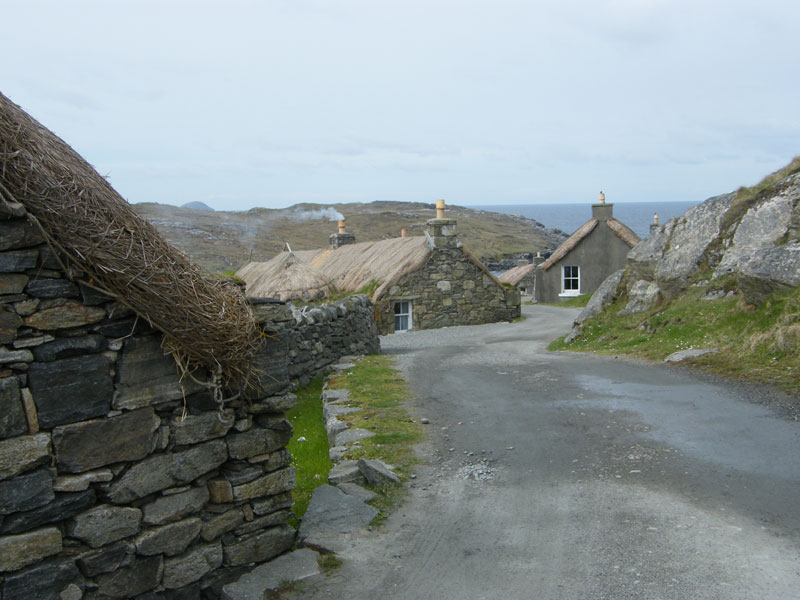 Blackhouses on the Island of Lewis

The fresh air, the relaxed atmosphere and the perspective of adventure are the key ingredients at the beginning of any tour of Scotlands islands by motorhome.

The Isle of Harris is joined to the Isle of Lewis and is the second island down the Outer Hebrides chain of islands. Magnificent beaches and scenery along with its famous Tweed and Art galleries are its hallmarks. 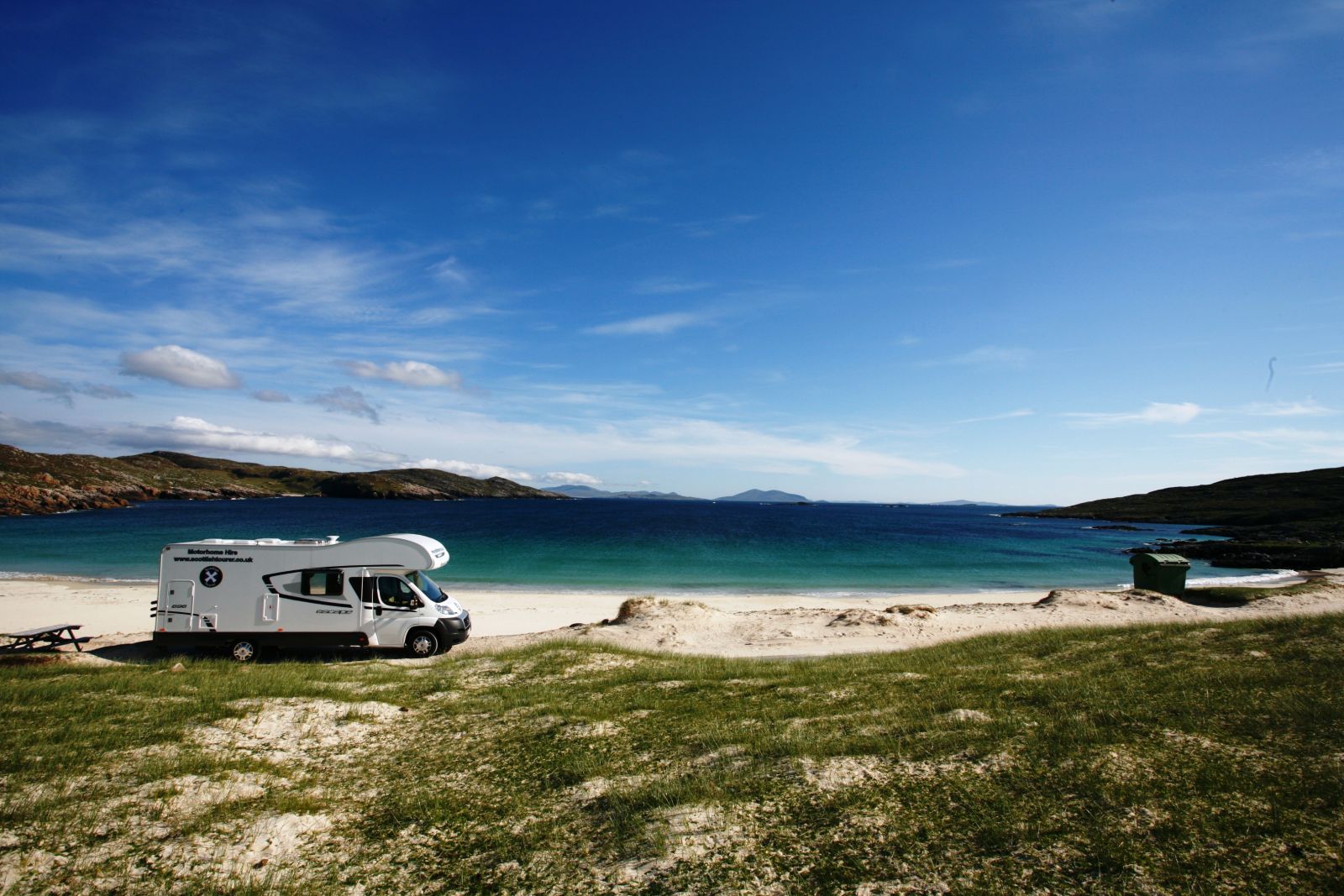 Beaches are probably the feature of Harris that impress most visitors. The colour of the water, even on a dull day, and the purity of the sand are simply stunning. The beaches range from the huge expanses of Traigh Losgaintir (Luskentyre) and Traigh Sgarastaigh (Scarista) to little sheltered coves beside the road at Na Buirgh (Borve). Behind the beaches are the machairs – green grassy plains covered in a mass of wild flowers in the summer. The images probably don’t do justice to the wonderful colours and sheer size of the beach area.This area is a must if you intend to tour scotlands islands by Motorhome.

An abundance of wildlife can be found here. Home to the famous Golden Eagles, you may also see otters, Minke whales and dolphins around the island, others things to see and do include visting the whisky distilleries and the fairy polls is not to be missed.
A well known tourist route is to drive along the Mallaig road towards the camping sites of Arisaig, where you will find plenty to see and do. Surrounded by stunning scenery, this area is a must see for all who tour Scotlands islands in a motorhome.

For more information or advice please visit our website - https://www.scottishtourer.co.uk/

← Motorhome Hire Scotland, Advice from The Experts Motorhome rental in Scotland is an excellent way to explore this beautiful country.→